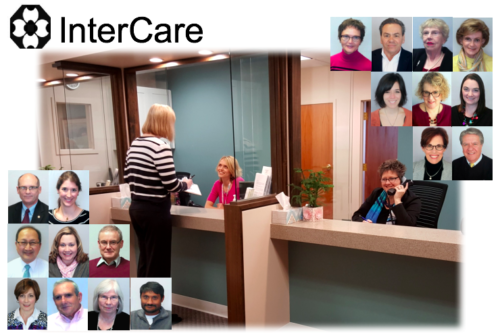 Finding the right EHR for your large practice isn’t something that can be approached half-heartedly. For Kristin Seitanakis, Chief Operating Officer for InterCare Psychiatric Services, it became apparent just how much an underperforming EHR can hold a practice back.

Seitanakis recalled, “We used a system that was not a full EHR, so we basically put all of our paper records on an electronic filing system. Our clinicians just continued to use the same paper record and we’d scan them in. It removed the stacks of paper in the office, but the EHR did not change the way we practiced.”

InterCare’s existing EHR system wasn’t helping them achieve the level of efficiency they had hoped to come with an electronic solution. Seitanakis concluded:

“It wasn’t easy to see the whole picture of the practice. Reporting was cumbersome, and I couldn’t easily get answers to my questions. For example, in our old system, we lost track of outstanding accounts. When we were cleaning up accounts in our old system, we found that some of them were a couple of years old! […] With public patients, in particular, the timing is so important. You only have so much time to file a claim. If there’s a coordination of benefits issue, you just run out of time.”

The challenge for Seitanakis, as well as any other operations executive, is to reconcile the many moving parts of a large organization and iron out inefficiency or waste. In the case of InterCare, this meant smoothing out the workflows of six psychiatrists, two nurse practitioners, ten other behavioral health providers, and ten support staff, in addition to keeping up with billing, insurance, and regulatory compliance.

Manually making up functionality gaps in software was becoming a notable strain on InterCare’s resources, and considering the time and effort pouring into tasks that software automation could have potentially handled on its own, it became obvious to Seitanakis that the right EHR solution would be designed specifically with behavioral health in mind. Valant proved to be the right fit.

“We decided to look at every single one of our processes, both on the administrative and clinical sides of the practice. We discarded some of our old processes because Valant had come up with solutions that we had jury-rigged in the past. Adopting the Valant EHR helped because we took a fresh look at how we were managing the practice, and I really think that Valant has helped us improve.”

Software automation is effective in shouldering the cognitive burden within a large practice setting, but it also helps to streamline several interdependent workflows throughout the organization. “I really like how Valant continues to have everything linked together so that the software is the go-to place for everything in the practice,” Seitanakis remarked. “It was easy to get started because we didn’t have to customize everything.”

The result was a dramatic improvement in productivity. Furthermore, an entire room that had been devoted to file storage was converted into an employee break room. Overall, a noticeable change in workplace culture took place.

“We’ve been able to increase our volume at the practice without increasing staff. We are billing everything that we’re doing, nothing is getting lost, and about 92% of our insurance claims are less than 30 days old. Work stress has seen a noticeable decline. Billing staff used to worry about tasks they needed to manage. Now everything appears on the dashboard.”

Workplace demands in a large practice can be overwhelming without the right solutions in place, but just because an operation is large doesn’t mean it needs to be difficult to run. Using Valant’s private practice suite, Seitanakis was able make a lasting difference for InterCare, in terms of productivity and creating an improved work-life balance for clinicians and staff.

Interested in how software automation can improve your practice? Valant can help! Click the button below to learn more.

Curious How Valant Can Improve The Efficiency Of Your Practice?

Thank your for requesting pricing information for Valant EHR! A representative will be providing that information shortly.

Thank your for requesting a demonstration! A representative will be in contact with your shortly.

Thank your for requesting a demonstration! A representative will be in contact with your shortly.

Thank your for subscribing! You will now get Valant.com blog content direct to your inbox!

Thank your for subscribing! You will now get Valant.com blog content direct to your inbox!

Whether you would like to improve the efficiency of your operations, measure patient outcomes, or reduce your liability, we would love to show you how Valant can help your practice.

Get a Free Demo